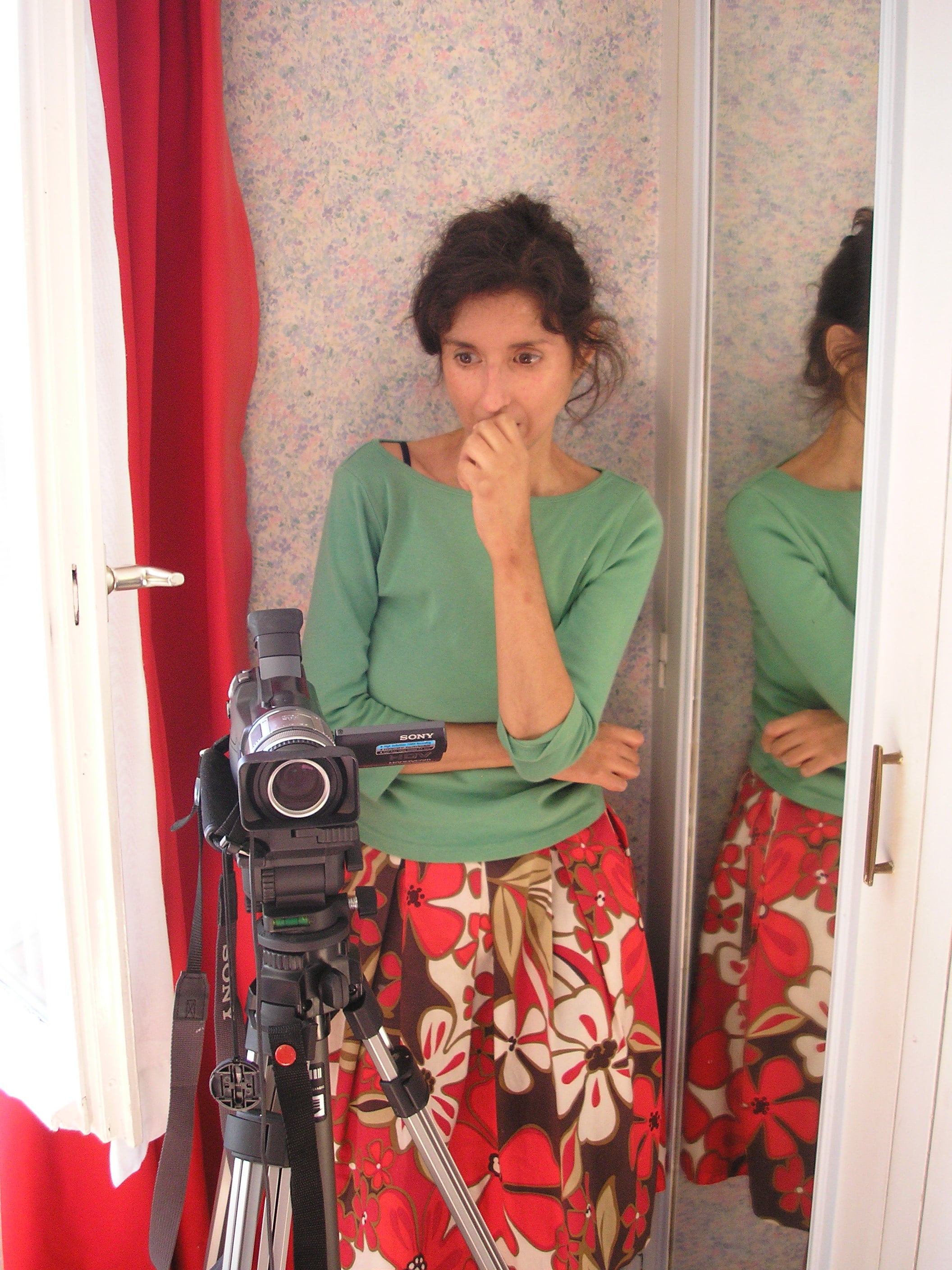 Remembering Greek Cypriot filmmaker Anna Kannava, her struggle, her vision and the experience of making a guerrilla film in Paris.

Grandmother’s house. Sometimes, I went back in my sleep. Besides the times in my dreams, I pushed aside the idea of returning. It was a new language to learn. New fears. A new way of life. ­ Anna Kannava, Ten Year After…Ten Years Older, (documentary, 1986.)

“I told you this film was going to kill me.” Greek Cypriot filmmaker, Anna Kannava’s, last words echo as if she had said them yesterday, not back in 2011 when I left her cosy weatherboard in McKinnon, unguarded tears streaming down my face, knowing it was the last time I would ever see her again. She was talking about her final feature film, Kissing Paris, which we had collaborated on in 2008. It wasn’t the first time I’d heard her make a dark crack at mortality. But this time it came true and three months after this exasperated line, she died at the age of fifty-one from lung cancer. I feel cheated, not only by so many more films and novels that could never be made. But also her work left behind, unfinished, which the world will never get to experience.

It was during Anna’s feature film, Dreams for Life, in 2002 that I had met her from a nervous distance. Naive and excited about my first film gig, I watched her on set. At times she screamed and stomped, at other times, she sat quietly in a corner, the long shoots taking a toll on her limited pockets of energy. I stayed well away from her, fearful that I should cross her sharp tongue. After production ended, I’d found out we were neighbours but it took a year, perhaps two, to pop in and visit her. Of course, all fear melted away when she greeted me at her front door with a tight, love-emanating hug and we became instant friends.

Anna didn’t just wear colourful clothes with mismatched patterns. She was colour. Her love was fierce but you didn’t dare cross her. But even if you did, all was forgiven. Vibrant and opinionated, she was lightening trapped in the small scrawny body robbed of muscle tissue by the disease, scleroderma. The Greek word for ‘hard skin’. “I began carrying a photograph of my old face in my pocket,” Anna lamented in her second documentary, The Butler. “Then an old friend said to me, ‘you look different, Anna’. I said, ‘I lost my face’. He said, ‘you haven’t lost it. There’s just less of it now’.”

Her life revolved around food, family, film, poetry and writing. Not necessarily in that order. On numerous visits, I found her hunched over her iMac, a colourful beanie swallowing her head while she one-finger typed the next screenplay or novel in cut-off gloves. Nino, her loyal brother, her butler, was never far away. When Anna wasn’t writing, she was thinking about food hours in advance of mealtime.

“Darling, what would you like to have for dinner? Nino would gently ask, to dampen the interruption of his sister’s work.

She dug my emotional life and failed relationships in spades, curious about everything that went wrong and right with it. We discussed art and film, but not in a wanky way. She hated intellectual wankers. I guess that’s why we got on so well. My pop-in visits evolved into dinner and after mild protests I would stay for delicious vegetable soups and fried haloumi cooked by Nino to Anna’s strict specification. Anna slurped away, self-conscious about how she looked and sounded with teeth that had outgrown her disappearing face. Afterwards, we would cosy up on her couch in the front room, surrounded by paintings, wrap ourselves in handmade blankets and watch French films on SBS. We fantasised about the Louis Garrells and Romain Durises we would never meet, and dream of Paris, Europe, and love.

One day, she told me about a script she was working on. A film set in Paris. A love poem to the city of love and longing, that deep down, Anna, perhaps yearned for. It was a melancholic story, rich with unrequited love and missed opportunities with loneliness and self-discovery at its heart. Perhaps, she too, in her baggy colours that hung loose on her small frame, longed to be touched, caressed, fucked, like the lead character, Claire. Borrowing small pieces of my life, she stitched them with her own love story of a city that remained a dream for her.

When she had me in mind to play the lead character, Claire, a quintessential French name, I was frightened. I had only performed in silly short films. I had never carried a film before. If she was lucky to receive any film funding, she warned, it was going to be hard work. Very hard. But as I had technical filmmaking skills, Anna thought I could pull it off.

When news came that the Australian Film Commission awarded Anna a small film grant, I was elated and terrified. I sold my flat to pay for the trip.

Nothing prepared me for the Mount Everest filmmaking experience. I climbed aboard the project with passion and naivety. We moved to Paris with suitcases filled with my mother’s and Anna’s vintage clothes and a dream to make a film. In a small apartment in the 11th arrondissement, I lived with Anna’s dreams and her disease. We scoured acting websites and auditioned French actors, filtering the footage to select the right actors. There were arguments. Oh boy, were there arguments. Anna was always right, even when she was ‘sometimes’ wrong. But my love for her never waned. We pushed and pulled, two stubborn heads in the City of Light.

Because of her illness, Anna’s days began at midday. Anna planned the day in her head, which she didn’t share with anybody else. We shot in the afternoons as the Paris sun set over the gloomy August sky. Shooting on a micro budget, meant doing things on the sly; no permits in a city burdened with complicated rules. Scenes in Paris’s Metro with my character, Claire, plonked on the matching coloured plastic chairs of the station, drew the attention of RATP security. Shooting long after midnight, we only stopped filming when an RATP officer approached.

The answer was always, “We don’t speak French, we are Australian” and feigned ignorance. We pretended to pack up our camera gear, only to find another spot in the metro. Until vagrants wearing liquored scars across their faces threatened us out for disturbing their makeshift beds for the night.

Anna’s obsession, Claire’s obsession, with capturing the Eiffel Tower from every single angle, meant traipsing the circumference of the Paris’s escargot from the gardens of Belleville to the top of the hill at the corner of rue de Pyrenees and McDo to capture the perfect shot. I stumbled around in the metaphoric darkness, trying to figure out what we were shooting next from the script. But the only way was Anna’s way.

There was no time to think about performance or actors craft. Or time to get into character. We were lucky to get the shot in sometimes precarious situations. I set up the tripod and the video camera, checked the sound and jumped in front of the camera. Anna tweaked the framing, and it was a print. Luckily, most people left us alone.

Many friends and family appeared in the film. My ex-husband as the ditched boyfriend (art imitating life?), my father, well, he played my father. My mother, in watery eyes captured in super eight at her wedding, portrayed Claire’s dead mother. And long-time friend, Petra Glieson, played the replacement girlfriend. Anna fused reality with fiction to pure poetry on screen.

After wrapping the film, I backpacked Europe and like film imitating art, or the other way around, I moved to Paris while Anna spent painstaking months editing the film in Melbourne. Kissing Paris premiered at the 2008 Brisbane International Film Festival but I missed it because I couldn’t afford the plane trip from Paris. It screened in Ireland, the USA, and niche festivals around Melbourne. Her dream of screening Kissing Paris at MIFF, a festival that had supported her earlier works, never eventuated.

Without having the proper clearances, Kissing Paris has languished on the shelf for years, in limbo. Anna wasn’t one to be bothered with contracts. Until the last days of her illness. She just took people at their word. Hopes of a DVD release floundered with the prospect of hunting down all the collaborators to sign off on. One day, I hope to dust off the old emails and finish what I had promised seven years ago. But it may be an uphill battle, especially after the length of time that has passed.

Our emails flowed back and forth over the years and Anna continued to dig. She was my light when everything turned dark in mine, even from 10,000 km away. Melbourne winters debilitated her. She longed for European summers with her brother, Nino. She visited my parents from time to time. My mother, bitter about my abandonment of her to a faraway city, often mined Anna for gossip about me. Anna, always loyal, remained tight-lipped.

In her final email, six weeks before she died, she was still waiting for the editor to send her another chapter of her book. It was a race against the ticking clock to finish unfinished projects before the lung cancer took her. I waited in Paris. No miracles came. In her final days, my parents visited her in the hospice. My father, having enjoyed working with her on Kissing Paris, was saddened by her stillness as she slipped away.

When Anna died, I, along with her dear friend, filmmaker, Bill Mousoulis, watched her funeral unfold on Facebook. Bill, in Greece, and me in Paris, both too poor to make the trip home. I missed the subsequent retrospectives that followed in her name. There is comfort for the living in being able to say goodbye. Perhaps this was why her death was just a dream to me: unreal.

‘I used to think if there was a heaven, Grandma would go there’.

I don’t believe in ghosts. But if there was a heaven, Anna would be there. In fact, I asked Anna once if she could give me a sign if the other side existed. As the clock ticked past the seventh anniversary of her death, I’m still waiting. There have been no ghostly appearances or strange knocking sounds. If there were anyone who could find a way to communicate through another vortex, it would be Anna. But perhaps she doesn’t need to. Anna might be gone and the void left by her unfilled. But in the hearts of those who knew her, those who admired her work, and the new audiences who continue to discover her work, she lives on.